Once marketed as being as safe as common table salt, the popular weed killer Roundup® has been the subject of extensive litigation from consumers who were diagnosed with non-Hodgkin lymphoma after prolonged use of the product. If you’re coping with a cancer diagnosis related to Roundup usage, we encourage you to contact our Roundeup cancer lawsuit attorneys to learn more about your right to compensation. 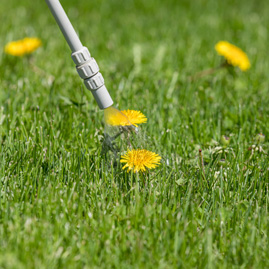 A Brief History of Roundup

Monsanto first introduced Roundup to customers in 1974 as a product for both home and commercial landscaping. The product quickly became a consumer favorite because of its ability to block proteins essential to the growth of common weeds such as poison ivy, kudzu, and dandelions. Roundup’s active ingredient is the herbicide glyphosate.

In the 1990s, farmers began heavily utilizing “Roundup Ready” crops that have been genetically engineered to withstand Roundup so the product can be used to control weeds without harming the surrounding crops. Today, nearly all of the cotton, soy, and corn grown in the United States has been treated with glyphosate. In total, over one billion pounds of the product is applied each year.

How Roundup Is Linked to Non-Hodgkin Lymphoma

Non-Hodgkin lymphoma is one of the most common types of cancer in the United States—accounting for nearly 4% of all cancers diagnosed each year. It begins in the white blood cells known as lymphocytes and most often affects adults. Diagnosis normally occurs after experiencing symptoms such as unexplained weight loss, abdominal pain, fever, trouble breathing, night sweats, and fatigue. It’s also associated with painless, swollen lymph nodes in the groin, neck, or armpits.

While it’s true that other companies make herbicides with glyphosate as the active ingredient, Monsanto’s Roundup has been the focus of litigation because the product’s inactive ingredients appear to increase the toxicity of the glyphosate. Monsanto has also tried to suppress studies about the link between cancer and glyphosate while actively marketing Roundup as a product safe for regular use.

By failing to provide customers with adequate disclaimers, instructions, and warnings regarding the prolonged use of weed killers containing glyphosate, Monsanto has opened itself up to product liability claims based on marketing defects. Although the majority of Roundup cases are still pending, courts have shown they are willing to hold Monsanto accountable. For example, Dewayne Johnson, a school groundskeeper, was awarded $78.5 million in 2018. The verdict was appealed and damages were reduced to $21.5 million in 2020, but the court still found “Monsanto acted with a conscious disregard for public safety.”

Our Roundup Cancer Lawsuit Attorneys Will Fight for You

If you or your loved one have been diagnosed with non-Hodgkin lymphoma after the prolonged use of Monsanto’s Roundup, it’s imperative that you seek our product liability attorneys as soon as possible. At SJ Injury Attorneys, we’re committed to helping people who’ve been injured by unsafe products obtain compensation for medical expenses, lost wages, and pain and suffering. We believe consumers shouldn’t have to bear the financial burden of a manufacturer’s negligence. Additionally, by taking action to hold Monsanto accountable for your cancer diagnosis, you’re doing your part to support efforts to remove Roundup from the marketplace and protect the health of future generations of Americans.