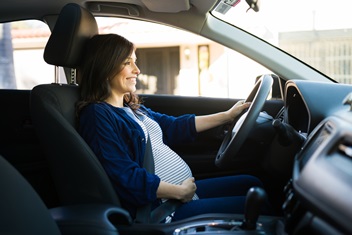 While being involved in a car accident is a dangerous and stressful experience for anyone, it’s even more threatening for an expectant mother who has not only herself but her unborn child to worry about. Women in their second trimester of pregnancy are four times more likely to be injured in a car accident than others.

If you or your baby was injured in a Texas car crash that was not your fault, you need an experienced car accident attorney to demand fair compensation from the at-fault driver.

In addition to the injuries commonly suffered by all car crash victims, the conditions below are frequently sustained by pregnant women, in particular:

Half of traumatic injuries to pregnant motorists or vehicle passengers involve placental abruptions. When the placenta is detached from the uterine wall as a result of a car crash, blood flow to the fetus is cut off, and the lives of both mother and child are threatened.

When an expectant mother goes into shock after a car wreck, her body reacts by rerouting blood from the uterus to other organs in order to keep the mother alive. Fetal mortality results in more than three-quarters of such cases.

Contact with a steering wheel, seat belt, or dashboard during a crash can cause an expectant mother’s uterus to rupture. If it does, fetal death is almost always the result.

Cuts or lacerations suffered in a car wreck can lead to a loss of blood, which is especially dangerous in the case of a pregnant woman. Other common auto wreck injuries can bring on premature labor and delivery or cause a miscarriage.

Reduce Your Chances of an Accident

The less time you spend behind the wheel, the lower your chances of being in an accident are, so it’s a good idea to do essential driving only and stay off the roads as much as possible while you’re pregnant. When you must drive, heeding the advice below can reduce your risk of a wreck that could injure both you and your baby:

What to Do If You’re Involved in a Wreck

Even if you’re being very careful, some other drivers may not be, and you could find yourself the victim of an accident. If so, you should seek medical attention as soon as possible, even if you don’t feel that you’re hurt. You could have internal injuries with symptoms that won’t surface right away. There could also be damage to the fetus that should be diagnosed immediately. If you’re not transported by police or EMTs to a hospital, see a doctor right away on your own. If you’ve called 911 and are awaiting law enforcement or medical assistance, try to take as many of the following steps as you’re able to take while waiting:

If you’re physically unable to take the steps above, ask someone to assist you. Doing so will help your attorney to gather evidence about your crash and work to get a fair settlement for your property damage, lost income, and pain and suffering, as well as any medical expenses for treatment of injuries to you and/or your unborn child.

Are You an Expectant Mother Who’s Been Involved in a Car Crash in TX?

An experienced car accident attorney can work to get fair compensation for you and your unborn child. Contact us online, start a chat, or call us at 281-688-6880 to schedule your free consultation. You pay no attorney fees until we win your case.